Szeged in Hungary. The largest stadium in the city. Városi stadion or city stadium. It is also known as Felső Tisza-parti stadion. The capacity of the stadium is around 15,000 spectators. Or had such a large capacity. In the present conditions I do not know where it can fit so many people.
When I was in Szeged, my intention was to look at two matches. One has already been archived on this blog, Szeged vs Cegled and the second or the first that day was supposed to be the first women's league match. Something I missed in the preparation and women's teams I've found on the second additional pitch. On the first additional pitch have played youth teams. So I turned to the main pitch of city stadium and photographed it. You may notice in the pictures as that day the sun came out and disappeared behind the clouds.
At this stadium and its grounds next to women's team Szegedi AK are playing Tisza Volán SC (3rd league) and FK 1899 Szeged (4th league). I hope I will succeed and get to some of their matches.
How to describe the stadium. The simplest are the two stands behind the goals. Both are in one piece. Similarly I can say for the east stand although she has a separate sectors. Why, I do not know. Behind the northern stand are additional fields that I mentioned. On this stand is something that should be a scoreboard. At least the old scoreboard. On the south is a new small digital scoreboard!?
The west stand is the biggest. It has two small sectors to the north and south, for which I am not sure whether it is safe to use. In the middle of the west is a mixture of concrete, benches for seating and plastic seats. Exactly 173 plastic seats. And above the tunnel from which the players coming to the pitch, is I guess the part intended for press.
How much is the stadium left to the ravages of time can be seen also per track for athletics. No doubt this was once an awesome stadium but his time has passed. Pity. 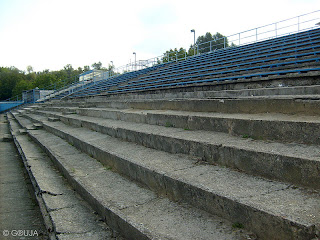 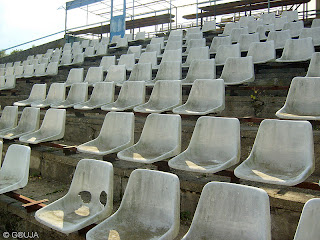 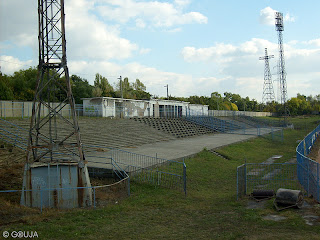