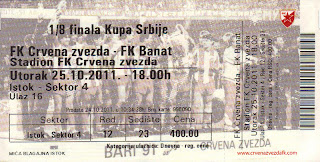 Cold, windy but dry weather in Belgrade. The only game in town on Tuesday. What else could I do but go there, on the Red Star Stadium (Stadion Crvene Zvezde) but the majority just called him "Marakana". The stadium is multi use stadium and is used for football matches and athletic competitions. The stadium is all-seated and the capacity is around 53,000 seats. It is the home stadium of FK Crvena Zvezda (eng. Red Star) but is also in most cases, the stadium where plays national team. I often came upon him exactly in those circumstances, to support national team.
The first football stadium in this location was constructed in 1927. That stadium was demolished in 1959 and on the its grounds started to build new, which was finished in 1963. Then he had a capacity of almost 110,000 viewers and therefore got the nickname "Marakana". Today the figure is significantly reduced by placing a chair on all four stand following the modernization of football facilities and respecting the rigorous demands of UEFA.
Back to game. In today's duel host was the favorite against a second league football team. We met Banat some time ago, you can see here. I went to the East where the tickets cost 400 rsd. To the north were the most dedicated fans, Delije. That stand was the most visited. It was still viewers in the east and west while the south was empty. "Red and White" have much trouble in this duel, during 90 minutes did not have any real goal chance against guests who fiercely defended and dangerously threatened from the counterattack. Fans from north again seek victory, but with play of their players can not be satisfied. At the end of the match, the most interesting things have happened. In 75 minutes the first goalkeeper from Africa defended for Red Star. It's not a joke. Up to this point the host has made all three substitutions of players. Then their goalkeeper was sent off but defender from Ghana stood at the goal. And when all expected penalty shootouts, referee at 96 minutes showed the penalty for Red Star. Added time was 5 minutes! Penalty, goal and the end of the match.