In the morning I decided to go to Hungary. I have not long been there. Somehow reason is always lack of time but this time I decided to be different. Still I remember my first game I watched in Hungary. That was back in 1990, I watched the Intertoto Cup match between the host Siófok and Bnei Yehuda from Israel. You guessed that I was there on vacation.
Szeged is the third largest city of Hungary but it is also walkable city. It is located near the southern border with Serbia. He is also known for its university but he is also one of the centres of the food industry. If you are already there, do not eat hamburgers, try szekelygulyas!
Szeged is not famous for football, handball is much more successful, you probably heard about Pick Szeged. As for the football, Tisza Volan is for years in the third division but something has happened this year. Szeged 2011 founded in July, when Makói FC and Kiskundorozsmai ESK merged.
Anyway, the match was exciting. This was the second league match, the eastern group. Admission was 500 or 1000 Ft which is about 2-4 euro. It was played in front of 1200 and according to some sources 1800 viewers, to me was a lot to count... During the first half cloudy weather, in second half the sun has warmed the host. After the first half guests are led by 1-0 even if their goalie is sent off, back in 27 minutes. Second half different story. The parade of goals. On general delight of home crowd who enthusiastically cheered at all time their team and not only the most loyal group of fans. The match ended 4-1!
Vasutas stadion or railway stadium, is a nice little facility and not far from the bus station. The stadium was built in 1937. Capacity is about 5,000 spectators. In the west is a huge covered stand on which are placed benches for seating in a red and blue color. At the entrance there is a small mobile trailer that serves as a buffet, whatever you want to drink they have all. Seems to me that the best is sell beer, because everyone holding cans of beer in their hands. For me something incomprehensible because in Serbia is not allowed to sell alcohol in the stadium and three kilometers around him during the game. On the eastern side is the hard standing. There are placed most dedicated fans who make a really good atmosphere during the whole game. Behind the goal on the north side is the scoreboard that are not used. On the opposite side is the club facilities and changing rooms. All in all a nicely stadium, but it is visible that has long since made. 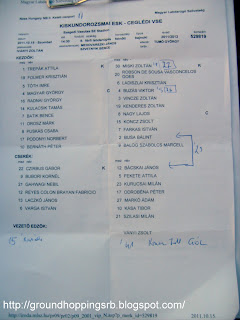 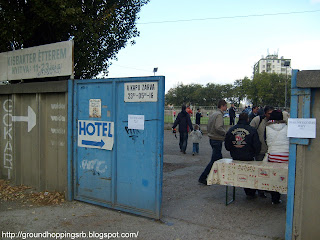 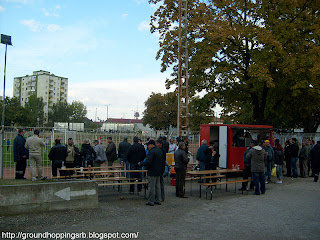 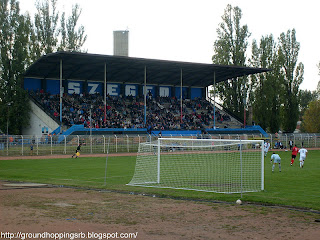 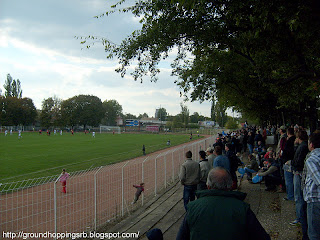 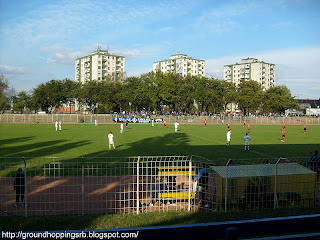 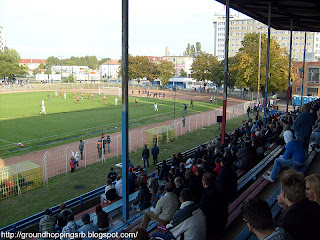 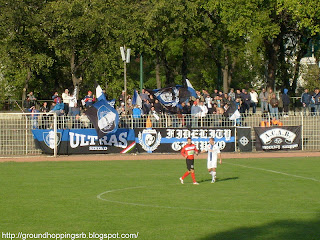 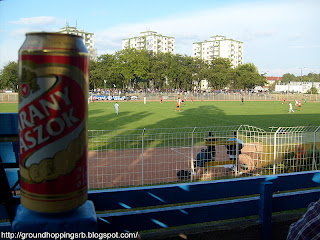