The first sports club in Belgrade was founded in 1903, football club Soko. Since 1913 the club changed its name to BASK, which is the acronym for Belgrade academic sports club. Once was an academic and now is an amateur club. In the postwar period disappears and in 1953 was re-born. The biggest success is the entry in the super-league in season 2010/11, but the club has not played a single game in this competition, because he withdrew from the competition. FK BASK today is in the Serbian league, third rank of competition and 100 years of history is greater than the current value of the club.
Their stadium is located in the place that is called Careva ćuprija (The Emperor's Bridge) near the same name Belgrade hippodrome. After the renovation in 2011 is also known under the name BASK Arena. At the stadium was set new artificial pitch and the capacity of the stadium is about 3,500, but with only 420 seats. So this stadium entered in the Serbian football history as the first on which was played official match on the artificial surface.
Todays match was very bad. Admission was less than €2, but that does not attract more people to come. The atmosphere at the game was like in the theater. The only interesting were groundhoppers, whom was a full stadium. They are the fans what each club may wish. They are always there. 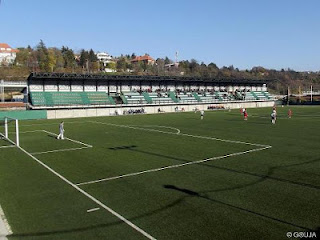 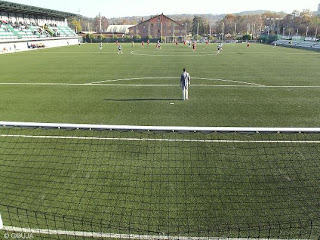 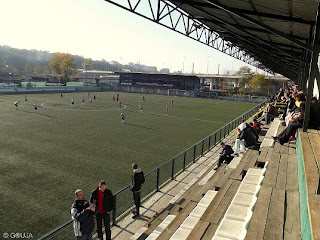