Groundspotting is the spotting of football grounds whilst traveling. So and I take opportunity when I am on the road to drop by in some places, to see some grounds if it is possible. My journey led through BiH and Montenegro. The first stadium, which is located beside the road was in Goražde, Bosnia and Herzegovina. 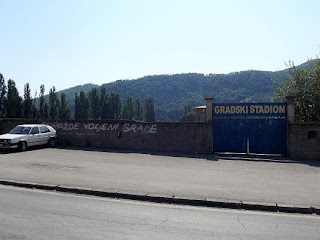 City of Goražde is located in the central upper part of the river Drina. One of the oldest sports is, of course, football. The first football club in Goražde was established in 1918. After several name changes and merging two clubs into one in 1960 was created FK Goražde. Last season club played in the First League of the Federation of Bosnia and Herzegovina, which is second rank of competition but dropped out of the league. Their home ground is city stadium "Midhat Drljević". Stadium have one stand with capacity of 1,192 plastic seats and who knows how many more places for standing. 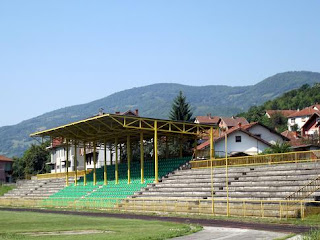 City Trebinje is placed in the southernmost part of Republic of Srpska and BiH. Located on the road Nº 20 from Belgrade to Dubrovnik, Trebinje is primarily regional center by its geo-strategic position. FK Leotar is football club from the city of Trebinje, founded in 1925. The club never managed to gain promotion to the top Yugosalv league, but won its only national championship in the first season in the Premier league of BIH, whose is current member. The club´s home ground is stadium "Police", nice all-seater stadium with capacity of 8,500 people. Unfortunately, at the time when I went there was no one in the stadium and I could not enter. I hope that one day I will come back here and watch a match.

When on the way from Trebinje enter to Montenegro, first town is Herceg Novi, on whose western side is located Igalo, town known as Mediterranean health spa. OSK Igalo is football club from Igalo. The club was founded in 1929 and currently competes in the 2nd league of Montenegro.

Their home ground is stadium "Solila", which is located near the sea, the promenade and next to the cemetery, but that is not easy to find. The stadium almost was nothing more than a pitch, has only a small hard standing and extremely high fence to the ground.

On the other side of the bay in relation to Igalo is located Tivat. The city and municipality of Tivat is located in the south of Montenegro in Boka Kotorska bay. The entire length of the Tivat Riviera is dotted with attractive bays and beaches and it is very desirable destination for tourists. It is accessible by car, train or bus, but one mayor advantage is Tivat airport. 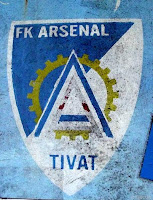 FK Arsenal is footbal club based in Tivat, Montenegro. No one knows exactly when it started playing football in Tivat, but in 1923 is established Orjen which will change its name to Arsenal in 1934. By the independence of Montenegro, Arsenal, which throughout history was largely in republic leagues, played in 2nd league of Montenegro where is even today. "Stadion u Parku" is club´s home ground and is located by Porto Montenegro Marina. Not very representative stadium but somehow interesting, surrounded by a concrete wall in the shadow of trees. 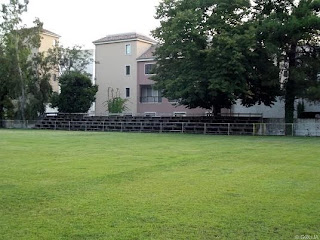 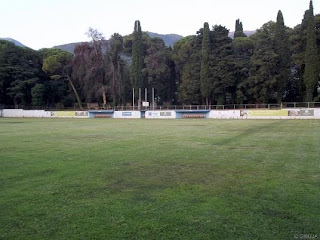 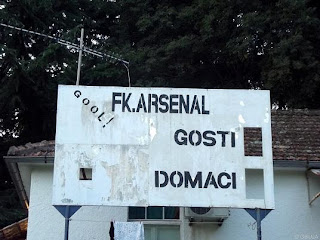