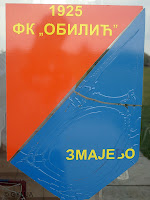 Since I have a habit that wherever I pass, turn on the local football ground, so one day I came to Zmajevo. It is a village in the municipality of Vrbas, Serbia, with about 3,500 inhabitants. FK Obilić is football club based in Zmajevo. Club was founded in 1923 but only two years later he began to compete and is probably the reason why it is on the emblem year 1925. Obilić was in results and financial crisis at the same time, during the last decade. The solution is found in fusion with the team FK Stari Vrbas from Vrbas into FK Stari Vrbas-Obilić. Today, the old name has been returned. The club curently plays in Vojvodjanska liga Zapad, which is the fourth tier of Serbian football. A significant event is the completion of the new building and the stadium. Today Obilić has a solid working conditions. Sports centre has nice stand on football ground, auxiliary pitch, tennis court and small concrete pitch. And they have a housekeeper. The man attacked me when I arrived and began to photograph! What I do, do I want to re-write bad of the club administration on the internet and so on...I barely persuaded the man that I am first time here! In the end, he complained that a few days ago some kids wrote graffiti on stand. The poor man...I felt sorry for him at the end. 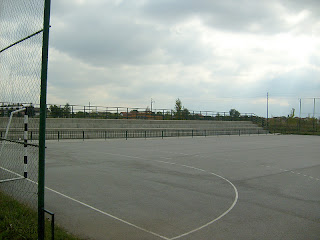