Smederevo is a city in Serbia, on the right bank of the Danube, about 45 km downstream of the capital Belgrade and has a very favorable traffic position.
Stadium of the football club Smederevo is located at the entrance to the city from Belgrade in the direction of the old road through Grocka. Officially name that is used is the city's stadium or stadium FK Smederevo, but is widely used the name Tvrđava (fortress). The walk from city ​​center takes about 15 minutes, that from the city’s main bus station 5 minutes more. In its current form stadium consists of a football pitch, four stands, two semicircular building and changing rooms below northern part of the stand. Work on the construction lasted from 1993 to 2000, but the project still has not brought the end. Gives the impression of a real football stadium, without athletic tracks and with a seating capacity of 17,200 places. On it plays its home matches FK Smederevo, the club that was founded in 1924 and through its time of existence is changed many names. Under the name FK Sartid made the biggest successful in its history, winning the National Cup in 2003. Unfortunately today the club is one step away from relegation from the super league. Tickets were available on the gate before the start of the match and tickets cost either €3 for the area behind the goals, or €4 for a seat at one of the other two stands.It was expected that the guest much easier to win, but at the end, for local fans unhappy defeat in the last minutes of the match. 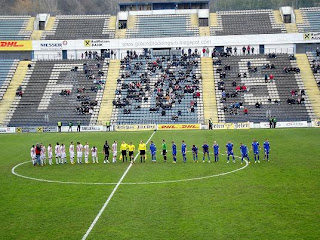 Other photos are here.