Gradski stadion Subotica.
City stadium of Subotica, Serbia. With a capacity of over 20,000 spectators with around 3,000 plastic seats.
There is a football pitch and a registered track for athletics suitable for competitions. One part of the west stand is covered.
This ground is home of FK Spartak Zlatibor Voda. The club currently plays in Jelen Super liga.


Last several years, almost regularly I go to matches of Spartak. In fact I'm going a long time on their matches (even when I was a child), but in the last decade have been poor and for years they played the third tier.
Ticket from season 2008/09 when Spartak playing in second rank of competition named 1.liga Srbije. No names of opponents on them.

Tickets from season 2009/10 when Spartak playing in first rank of competition named Jelen Super liga. Only when playing Partizan and Crvena Zvezda someone make an effort to write the names of opponents and of course the price that is higher than for the other matches. 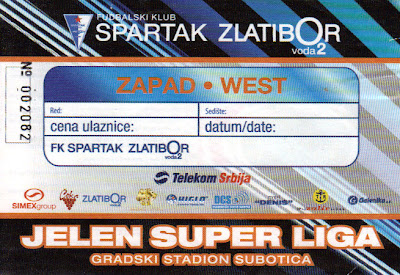